Multifunctional Pikler with detail variation. It is possible to choose the details which are more preferred! Easy to assemble on your own. 
This toy will improve your child's balance, muscles, courage, and imagination.Made with care to have the best for your children.WARNING! Parents must take full responsibility Please don't leave your kids unattended while the Multifunctional pickler is in use.

SHIPPING AND RETURN FOR SHIPPING PLEASE ADD YOUR PHONE NR. DELIVERY COMPANIES NEED IT TO CONTACT YOU.

My Grandkids love this apparatus. 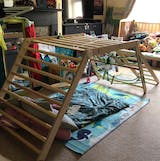 My little sister Love this

I bought it for my daughter.s second birthday. I thought it was gonna take weeks to receive but it arrived 3-4 days later! She loves it!

It took us about 2 hours to build between 3 people. We had some issues when doing it but contacted Ewartwoods and they replied straight away (5 mins later,literally) explaining what we hadn’t understood from the instructions.

We had used it as a pikler triangle and as a house, and love both shapes. In both cases you can put cushions inside and kids can play under it too.

It’s big but it doesn’t feel like it occupies the full room at all. Its also stylish and I love the wooden colour instead of the coloured ones that you might get tired of..And it feels very secure!

I would buy a slide board as an extra!!! I regret not doing it so hopefully I will one day!

Choose your wishlist to be added

We will notify you on events like Low stock, Restock, Price drop or general reminder so that you don’t miss the deal

Are you sure you want to delete the wishlist?